The Isamu Noguchi Akari lamp -inspired by the traditional Japanese paper lanterns- is one of the design icons of the last century.

To be completely honest with you, before starting Mid Century Home I never heard of Isamu Noguchi and his works…but from the first moment I saw his objects and sculptures, I started to love them 🙂

Some time ago I wrote about one of his most famous furniture -the IN50 coffee table– and today I want to share with you what I learnt about another of his iconic creations, the Noguchi lamp named “Akari“.

The Isamu Noguchi Akari lamp reminds the traditional lantern in all the parts and materials used -it’s made of paper handmade from the bark of the mulberry tree with a very simple and light wooden structure- except for the traditional hand-painted decoration: the designer preferred a blank surface instead.

The name chose for the lamp was “Akari”: that means variously as ‘light’, ‘sun’ or ‘moon’.

The first one was produced in 1951 and since then the Isamu Noguchi Akari lamp has changed its design going from organic to geometric forms. From the 50s to the 80s Noguchi designed more than 100 different variants of it creating hanging, standing and floor lamps.

While experimenting with the artificial light in the 30s and 40s, Noguchi created the Lunar sculptural works that -with their unreal shapes, biomorphic forms and hided lights- were often used as interior decorations as well making subtle the difference between art and design.

The same philosophy -almost 20 years later- was the inspiration for the Noguchi lamp conceived to be practical and sculptural at the same time.

An Isamu Noguchi Akari Lamp for Everybody. 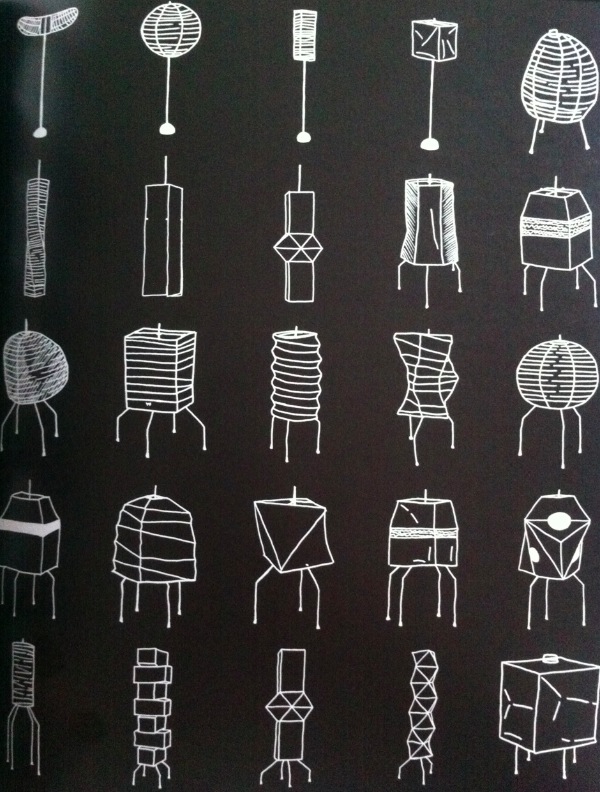 Not only Noguchi wanted to create beautiful and artistic objects, but also affordable and mass-producible. That’s why -ten years before the most famous Noguchi lamp- he designed the Three-Legged Cylinder Lamp for Knoll.

The place that inspired Noguchi to create his “Akari” series was Gifu: the Japanese city where traditionally were manufactured all the paper products such as lanterns or umbrellas.

At that time Noguchi was already internationally known and appreciated for his works, and the city’s major asked him to design an affordable and mass producible lamp to help to revive the local paper-craft industry. The artist started to work at the project the same day sketching out a lamp that perfectly mixed sculptural and design qualities from one side with traditional and advanced manufacturing techniques from the other: the Isamu Noguchi Akari lamp was born.

The lamps were an incredible commercial successful, were published in many interiors magazine and exhibited in Tokio as in New York along the 50s.

Despite their incredible success and the famous designer, the first lamps were around $7-50 being perfectly in line with the manifesto of many mid-century designers that aimed to produce beautiful but affordable objects.

The Isamu Noguchi Akari lamp series had many imitators …do you recognize/had one of them? Do you think it still has a contemporary look?

Let it me know in the comments!

You will only  receive original content about mid century that I don’t publish on MCH.