John Lautner, the highly influential architect behind such Mid-century greats as the Malin Residence, the Chemosphere and the Elrod Residence, described his design process as “a total involvement.”

Although, despite this self-touted all-encompassing approach, Lautner’s sketches and plans appear rough and childlike to the untrained eye yet always lovingly accurate and to the correct scale. Lautner often sketched as he built, his initial freehand plans and sections indicate a clear sense of structure and an overarching personality unique to each project. A certain chopping and changing of ideas is made apparent by the many rough, loosely crafted sketches that hold within them the secret of the idea; the one vital aspect of design that matters above any attempt at cosmetically important, media-friendly images.

Lautner’s sketches and plans were simply tools of communication, and what they were communicating, however chaotically, was Lautner’s unique vision. “The creative process – it’s a sweat. The thing is to be able to hold, and try to pull together, all the possible emotional elements, physical elements, structural elements and nature, and try to pull that into an idea. One idea. And you have to practice. So since I have been practicing that way for 50 years I can do it.” The ideas that were to form the lifeblood of each individual project were often closely related to the particular client that had commissioned the architect. To Lautner, each idea was unique to each client and every new project and challenge or problem to be solved, the problem being how to create buildings that can grow and live alongside people without confining them.

These buildings needed to be practical, provide light, space and room to live. The ultimate goal of Lautner’s “Real Architecture” was to remarkably improve the everyday lives of each individual client. “My clients are all pretty strong individuals or they wouldn’t come at all, they wouldn’t be doing anything, they’d just do what the status quo said to do, the average. I don’t have any average, no average at all.” This client-focused approach led a surprising amount of them to be directly involved with the design and construction of their own homes, often acting as owner-contractors or owner-supervisors. Clients Mauer, Gantvoort, Alexander, Deutsch, Harpel and Malin responded particularly strongly to Lautner’s practical approach and peculiarly American pioneering ingenuity whereas, commenting on Launter’s client-oriented approach, Mrs Segel declared: We’ve been dancing together throughout.” Once the idea was in mind, Lautner would then make a simple cardboard model to demonstrate the flowing, three-dimensional spaces he had envisioned. The model worked to communicate the spatial intentions of his design to both his clients and his architects and allowed them to visualize the distinct idea that would otherwise exist solely within the mind of Lautner: “I have the whole project in my head before I put it down on paper.”

Lautner’s unique approach to design and ambitious architectural vision meant his projects attracted gifted engineers, contractors and master-builders. Drawn by an appreciation of fine craftsmanship and truly experimental structures, these experts enabled Lautner to give physicality to his dramatic and daring designs. Key figures include Wally Niewiadomski, who worked on most of Lautner’s projects, including Elrod and Silvertop, and John de la Vaux, who worked on the Carling, Deutsch, Harpel and Malin residences. 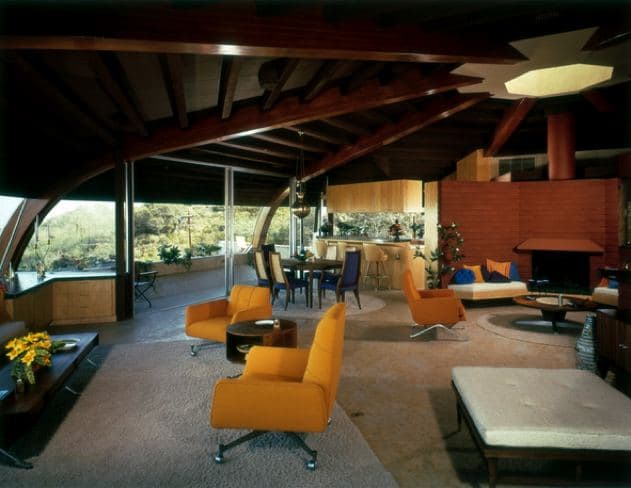 Without these highly skilled builders, contractors and engineers, Lautner would likely not have been able to pull-off such magnificent feats as the elegantly imposing Garcia House or the space-like modernity of the Elrod residence. Throughout his career, Lautner harnessed the idea and the vision to create exciting and dramatic structures. Never losing sight of his client’s individualities and utilizing the elite of domestic construction, Lautner designed and built his way into architectural immortality.