Frank Lloyd Wright devoted his life to Organic Architecture, the space within. Following this revolutionary design concept, he created the masterpiece called Fallingwater.

Every architect recognizes Frank Lloyd Wright’s Fallingwater as a true masterpiece. The American Institute of Architecture voted it the most significant building in the last one hundred and twenty-five years. When you walk into this house, there’s something that grips you, it’s not just a house in Pennsylvania, it’s part of a total philosophy, part of a total new way of life. Deep in the woods are the sounds of nature but in the highlands of Pennsylvania, among the wild flowers and rhododendrons, stands a magnificent work of art, Frank Lloyd Wright designed and constructed Fallingwater of four basic materials.

Stone which was quarried locally on the site, concrete which is a very organic material, steel which is largely showing up in the reinforcement of the concrete but also evident in the frames of the windows and glass. The architect placed the house directly above the waterfall which means that the foundation would have to be only one slab of rock ledge. This would create a difficulty as the site was not wide enough to build a foundation for a complete house. Frank Lloyd Wright decided, than, to design the foundation on the principals of a diving board.

Part of the foundation had to be cantilevered over the waterfall. He used this method four times in the foundation of Fallingwater, making the house a solid uniform creation in harmony with its surroundings.

The result of Wright’s work was a series of cream concrete terraces, cantilevered out over the waterfall, facing in different directions to take advantage of the moving sun and the views. They seem to float by magic over the rocks and the stream, tied together by a contrasting central section of stone, a vertical element that balances the horizontal terraces. Between the terraces, bands of windows blur the boundary between indoors and out, and glow with light after dusk.

The house itself is anchored to a boulder, the very boulder on which E.J. Kaufmann would lie in the sun and listen to the falls. Frank Lloyd Wright made that boulder the heart of Fallingwater.

Wright also designed all of the furniture to echo the house. Sofa’s that cantilevered from the walls and the low seats and tables had edges that extended like balconies. The basic color scheme of Fallingwater was selected by the architect himself. 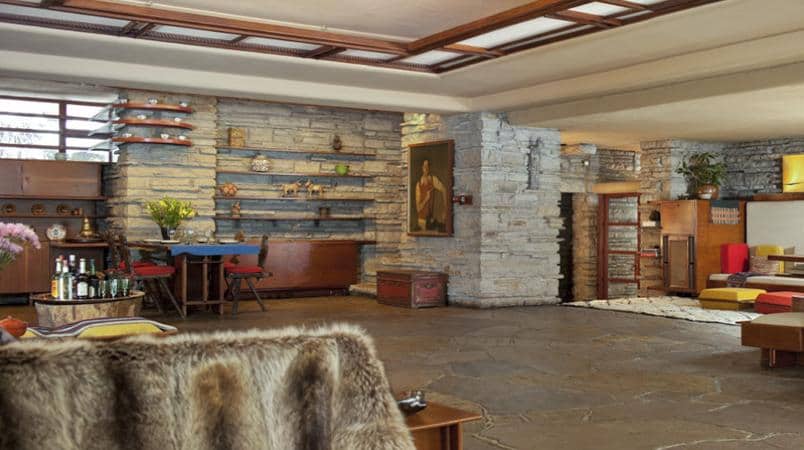 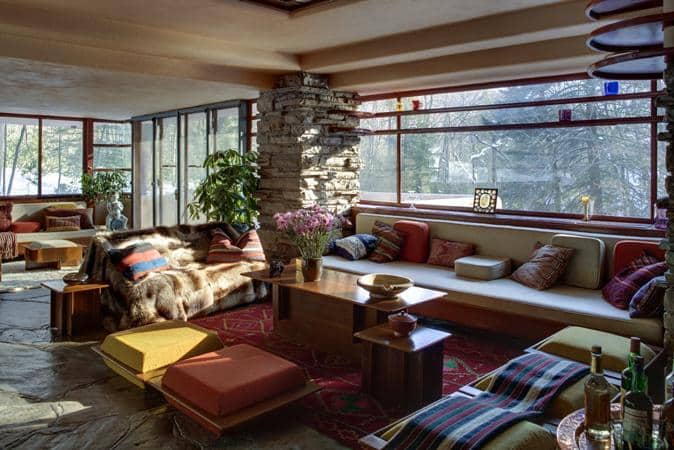 It shows his fondness of the warm earth colors of the American Southwest. Cherokee red became the Frank Lloyd Wright architecture signature color, which was used on all the steel frames around the house.

The great architect’s design never forgets the setting. The living room opens to the stream below. Here a stairway lets in the sounds of the falls and provides ventilation as well. It is the final link that weds the house to the beloved stream of the Kaufmann family.