An architect of considerable merit, the work of William A. Whifler stands as proof today of his talent and pure Modernist approach to architecture. Today, Graeme Whifler — a passionate advocate — tells us about his father’s love of good architecture, as well as the recent listing of the William A. Whifler House in the National Register of Historic Places.

First of all, tell us a bit about yourself and the relation with your father’s work.

My dad was a natural born teacher, at 19 he was in the Navy teaching electronics at Treasure Island during WWII, and in his autumn days he was a college professor inspiring a new generation of budding architects.

My brother, sister and I were his most cherished students. Since I was first born I got the full Whifler degree. He told me he never wanted me to become an architect which now I believe to be a lie of sorts, but instead, I took his training to become a writer/director.  My brother became a movie production designer.

So as a kid growing up all I knew was living in the house my dad built for us.

My dad was a hands-on guy. Our home actually was a test bed for his designs. Our tiny family home of 1952 underwent over ten additions, each seamlessly, and each expansion was a laboratory to test out new designs.

How does it feel to be related to such a talented and eclectic Architect?

There are no words to describe how proud I am of what my father created, his genius.  .

He loved creating but wasn’t much for publicity.  Perhaps he was a bit shy, or just didn’t care, or both, but few ever knew of his works.

While he was alive I didn’t take much interest in his works, again I was so bathed in his architecture it just seemed normal or ordinary.  Thirty years after his passing I now know how extraordinary he was. 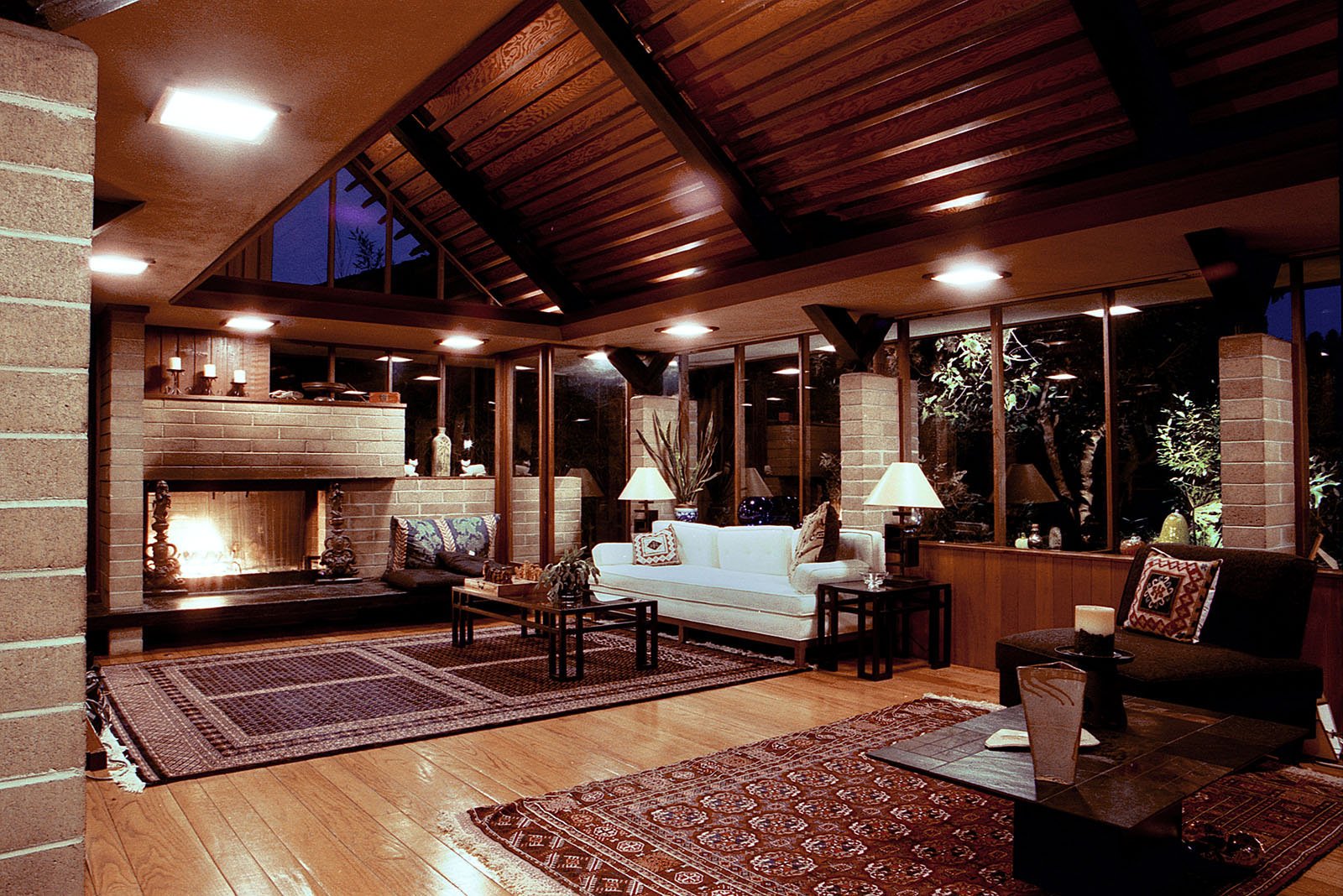 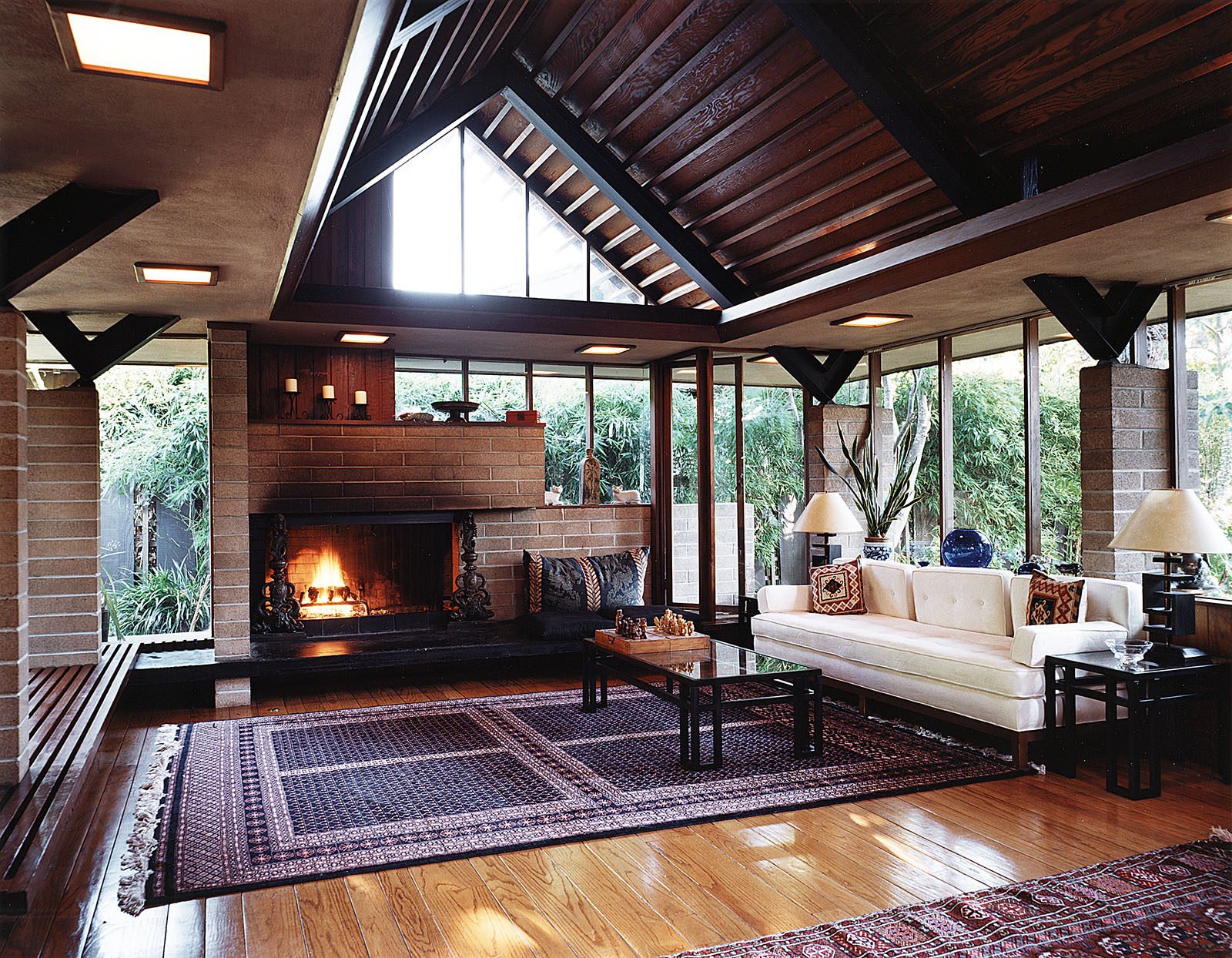 Your house, has been recently included in the register of historic places in California. Tell us a bit about the process and how does it feel, now, to live in a historic landmark?

The process of getting on the National Register took years. First, it was recognized by the State of California which took a couple of years to create the submission packet and have the state act on it.

Next, we created a new submission for the Department of the Interior. That packet of forms and photos underwent many revisions before it was finally put up for a nomination.  We received word last year that it had been selected for the National Register and it took almost a year to get the brass plaque created and hung.  History requires patience.

When I was drilling the holes and attaching the brass plaque to the William A. Whifler House I kept thinking how grand it would have been if he could have witnessed this.  His work recognized in this fashion, his eldest son who had shown so little interest went on a years-long mission to get that plaque hung. There would have been tears.

When you were younger, did you ever get a sense of your father’s importance to the particular moment of so-called “mid-century” modernism?

When I was a kid I had no idea of what my dad was doing.

Oh sure, he had us look at his new sets of plans which were like hieroglyphics, and we did get taken to job sites almost every few weeks, but we lived in one of his houses which was baseline normal and he could have been a cobbler for all I knew.

I remember in the sixth grade our teacher read a survey about the 10 most admired professions in the US.  Architects were number three right above senators. I was shocked that what my dad did was on the list, and proud how high up he was.

I met many of his clients, true A-listers, real smart surgeons, doctors, entrepreneurs, all folks who wanted to commission an artwork to live in. My dad grappled with the word modernism to describe what he was doing and favored the word contemporary.

But as a kid I had no idea what my dad was up to, why how inspired his works were.  I did have a best friend in the third and fourth grade and we did sleepovers at our two homes almost weekly. He had a big nice home, and it had banks of windows, but to me, it felt like an ice locker. In my fifties, I discovered my best friend’s home was an early Neutra.

A word about mid-century modern furnishings, none of my dad’s clients had them.

No Eames chairs or lava lamps, all my dad’s clients filled their homes with a  hodgepodge of furniture and never gave a thought to detailing their one of a kind art piece homes with trendy stuff that would now be found at Walmart. They commissioned a work of art house to live in, mass-produced decorating trifles were not on their radar. 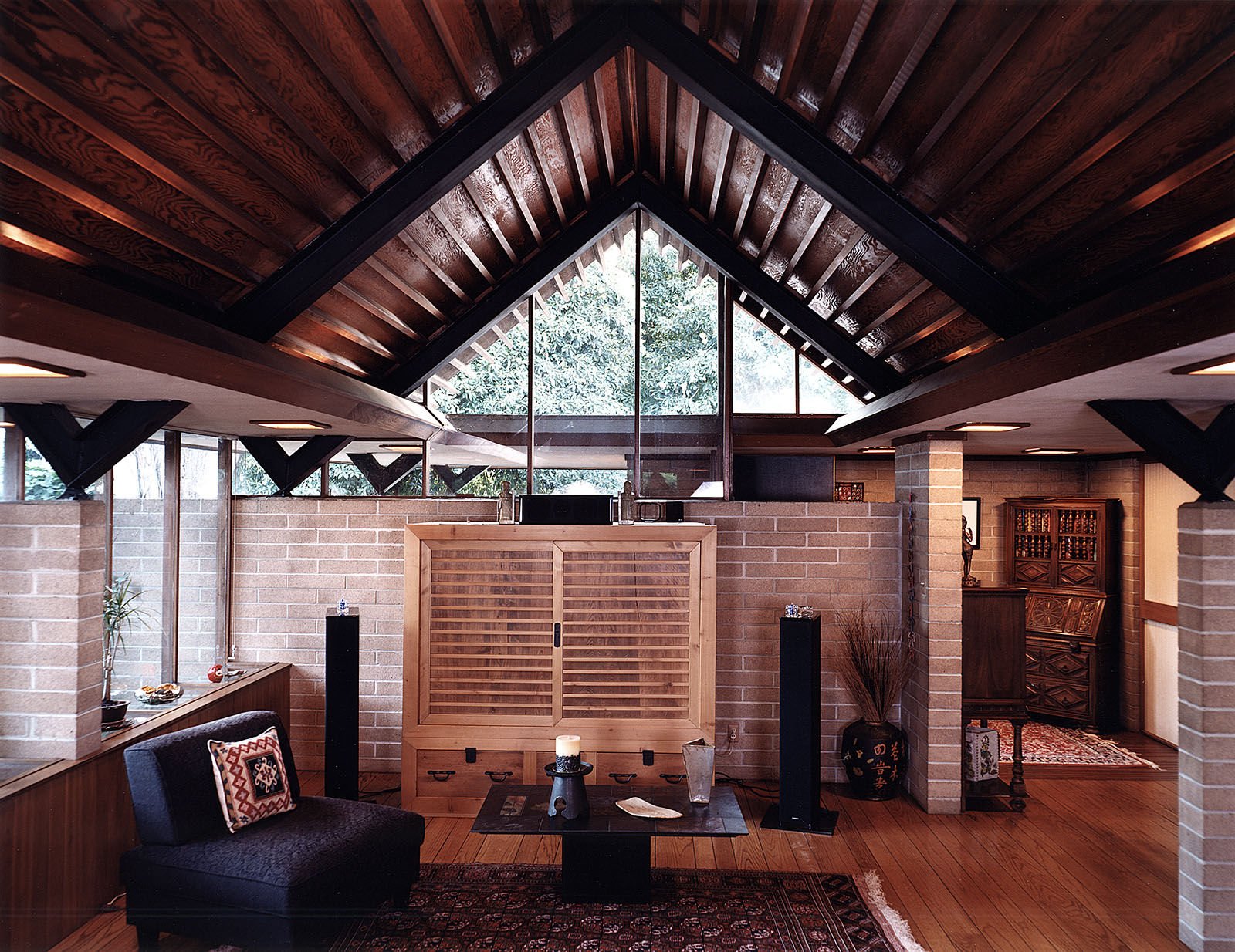 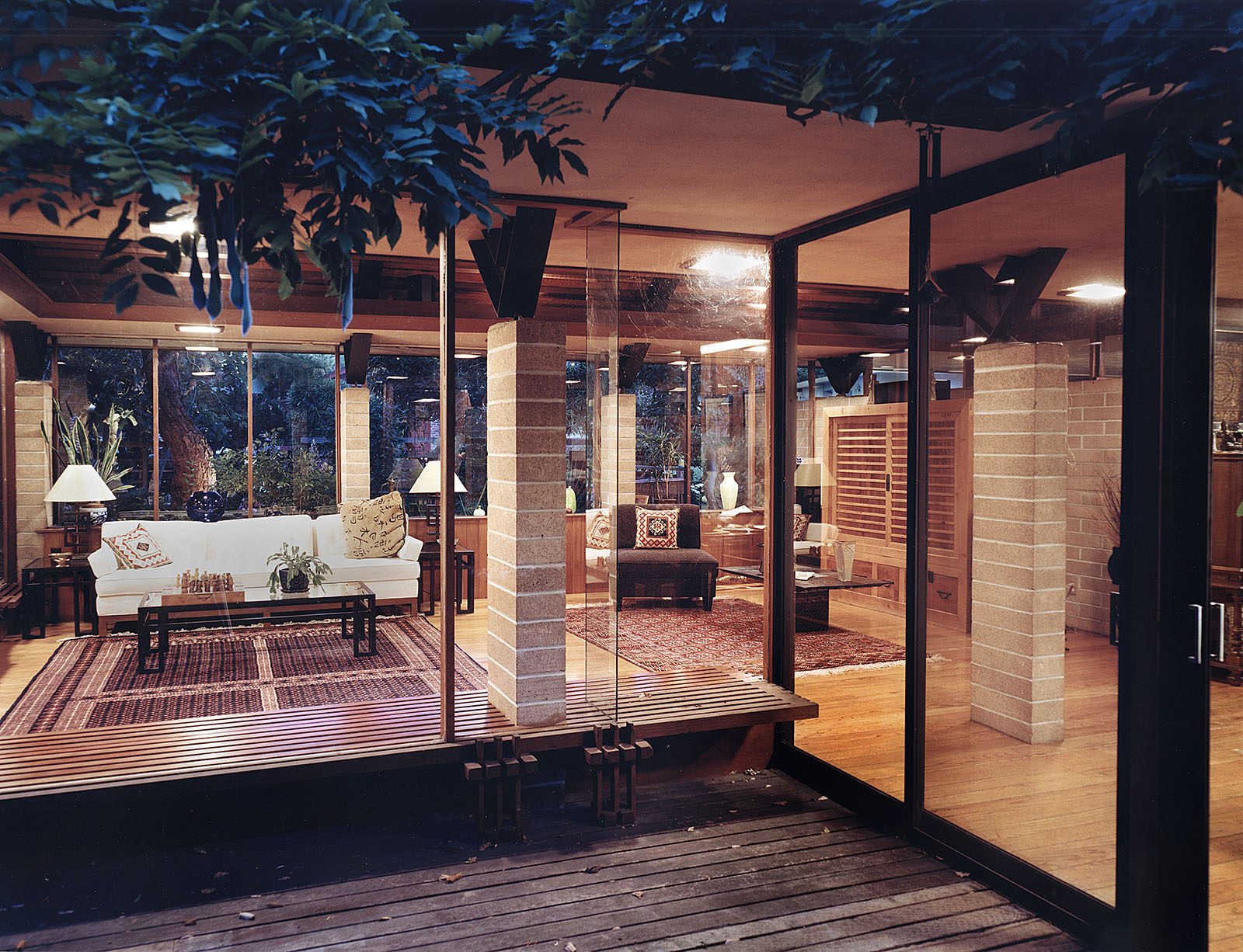 The William A. Whifler House was designed for your grandmother. How did the relationship Architect-client go?

My grandmother had been living in a 1912 Craftsman next door.  My dad had talked his mom into subdividing her lot, selling her old house and having her son design a smaller home fit for an older single woman, she was in her late 60’s at the time.

It was a constant dance to keep the square foot cost down to something like $15 per foot. Of all my dad’s works, I think this was the one he struggled with the most and took the most design risks.

When the house was finished and my grandmother first moved in, I don’t think she really knew what to make of it, it was so modern, so breathtakingly unusual.  She couldn’t really complain to her architect son but I’m sure he knew she was uncomfortable with his creation.

But then the reporters from the local papers and architectural trade magazines arrived snapping photos and interviewing her, and she was hooked. Being a retired stage actress the one thing she loved was to be the center of attention and her new modern home put her in a spotlight.

She had home tours, and proudly invited everybody she knew to have a look at her palace. And then there was always that amazed look on people’s faces as the entered the house for the first time. Sixty years later people still get that look.

Do you have any particular memories where you really fell for this style of architecture?

I was incubated, I was marinated in mid-century architecture, that’s all I knew growing up because my dad’s homes were my universe. Even my first girlfriend who I would sneak out of the house and traverse a canyon lived in a house designed by my dad.  I did know there was a sad and depressing alternate universe of the other, box houses without windows.

But if there was one experience that was an epiphany, that put my dad’s works into a context, that would be the time I spent a day wandering around inside Frank Lloyd Wright’s Hollyhock House.

Are you professionally involved with architecture? If so, does this legacy generate any pressure for you, or expectations?

My involvement with architecture is limited to deeply enjoying the truly great works.  My dad insisted I not go into architecture so I obliged and went into film instead as a writer/director.

My first works were rock videos in which I really pulled on the skills my father had taught because not only did I write, direct, edit, and produce, I also designed and built all the sets.

What do you value most in a mid-century home?

A truly great mid-century modern home has two elements that are akin to magic.

The first element is the flow of spaces, they make sense, they are warm and deeply human, they are surprising, and they massage the soul.

The other element is glass, lots and lots of glass. Unafraid, unapologetic, and daringly energy inefficient.  The inside blends perfectly with the outside, the lines are blurred between nature and man. 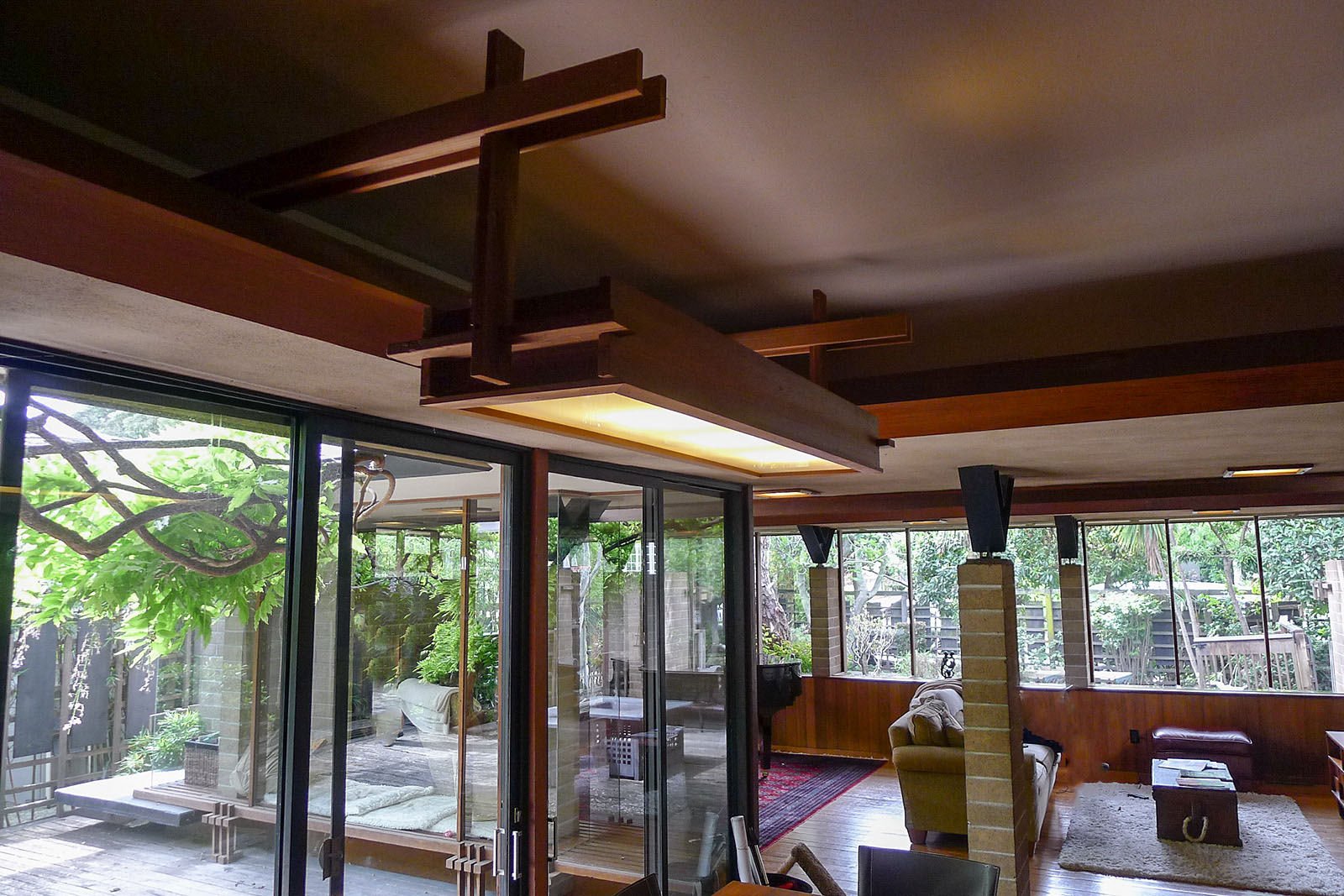 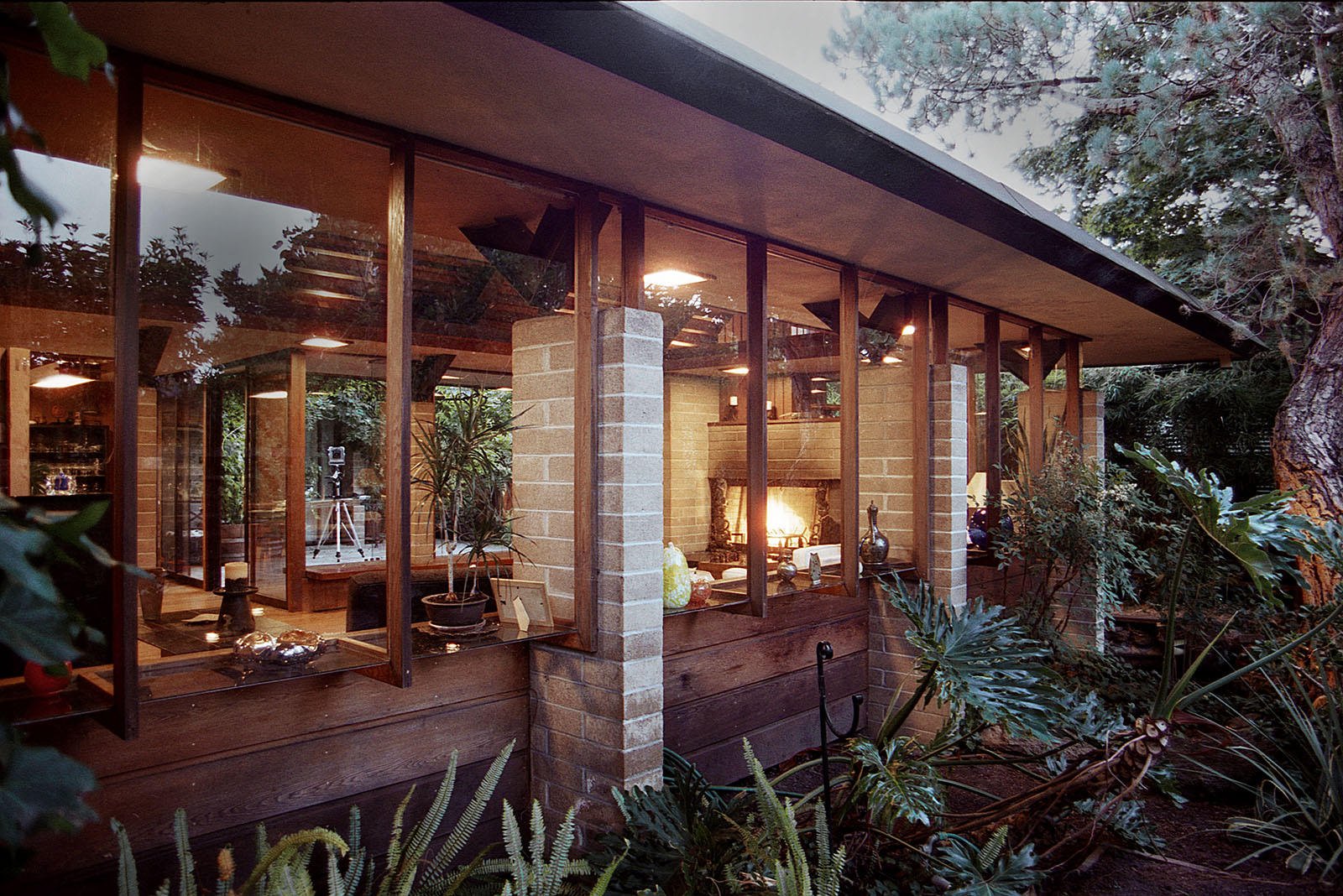 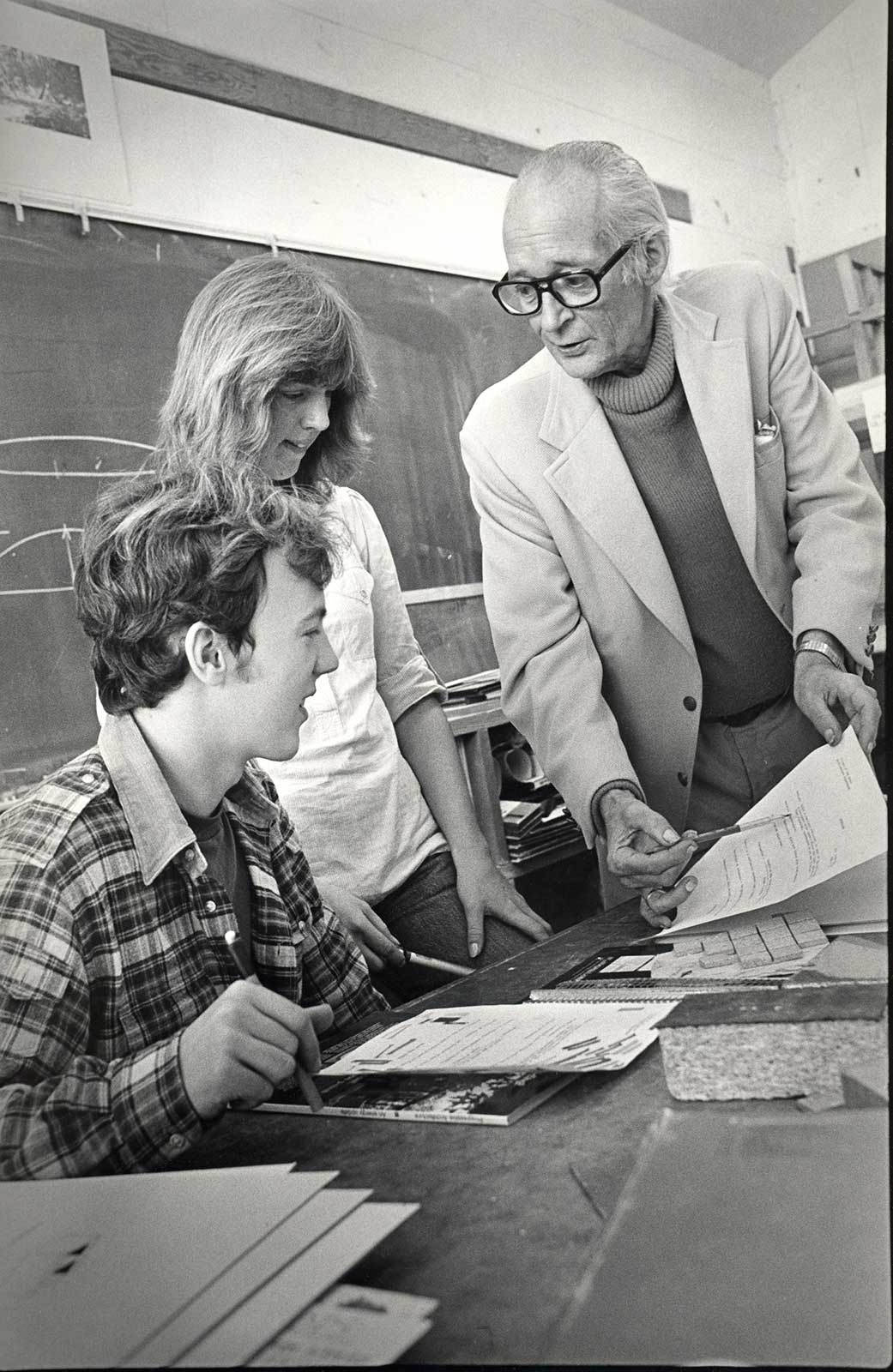 William A. Whifler with his students

And a similar question, what do you value most in your father’s homes?

First would be the warmth of his creations, he knew how to create shelters that would nurture a family. He was also brilliant at seeing his creations. He had walls of glass but each home had perfect privacy.

He followed the sun, so rooms that needed light at a time of day had it. But most of all, he toyed with engineering.

Last but not least, what are the advantages and struggles of living in a mid-century house?

Can I hone on this living in a mid-century house question a tad? There are vast deserts of mid-century housing tracts and having an Eames chair and a lava lamp doesn’t step one up to the next level.

Perhaps five percent of mid-century homes were modern. And then there were the exquisite mid-century modern marvels, the real gems, the true art. This last group are the ones I have knowledge of. The advantages of living in one of these are really measured in one’s soul, it has to do with harmony, inner peace, warmth, and living as one with the natural world as the homes are glass so the inside and outside merge.

One struggle is explaining to horrified house guests that sorry, there are no curtains to draw but not to worry, nobody really can see into the house because of where it is, and if they do, you can charge them for the show.

Of course the glass, the house gets cold in the winter. Energy was dirt cheap when these houses were built. In some cases, modern custom double pained windows and smart insulation can make them warmer and cheaper to heat, but most often retrofits ruin the marvel of a great mid-century modern.

They way I deal with this banks of glass “problem” is by wearing a sweater when it’s cold.

If one lives in a mid-century modern now, it’s like a time machine back to when people smoked and drank martinis and put men on the moon. A time when Frank Lloyd Wright, Schindler, and Neutra were cool.

Barbarian or connoisseur, that is the dreaded question when it comes to somebody who purchases a pristine mid-century modern magnificent property. Having seen pristine Neutra, Schindler, Write, and my dad’s works, there should be a ban on white paint and a hundred year prison term for those who paint over natural masonry or wood. 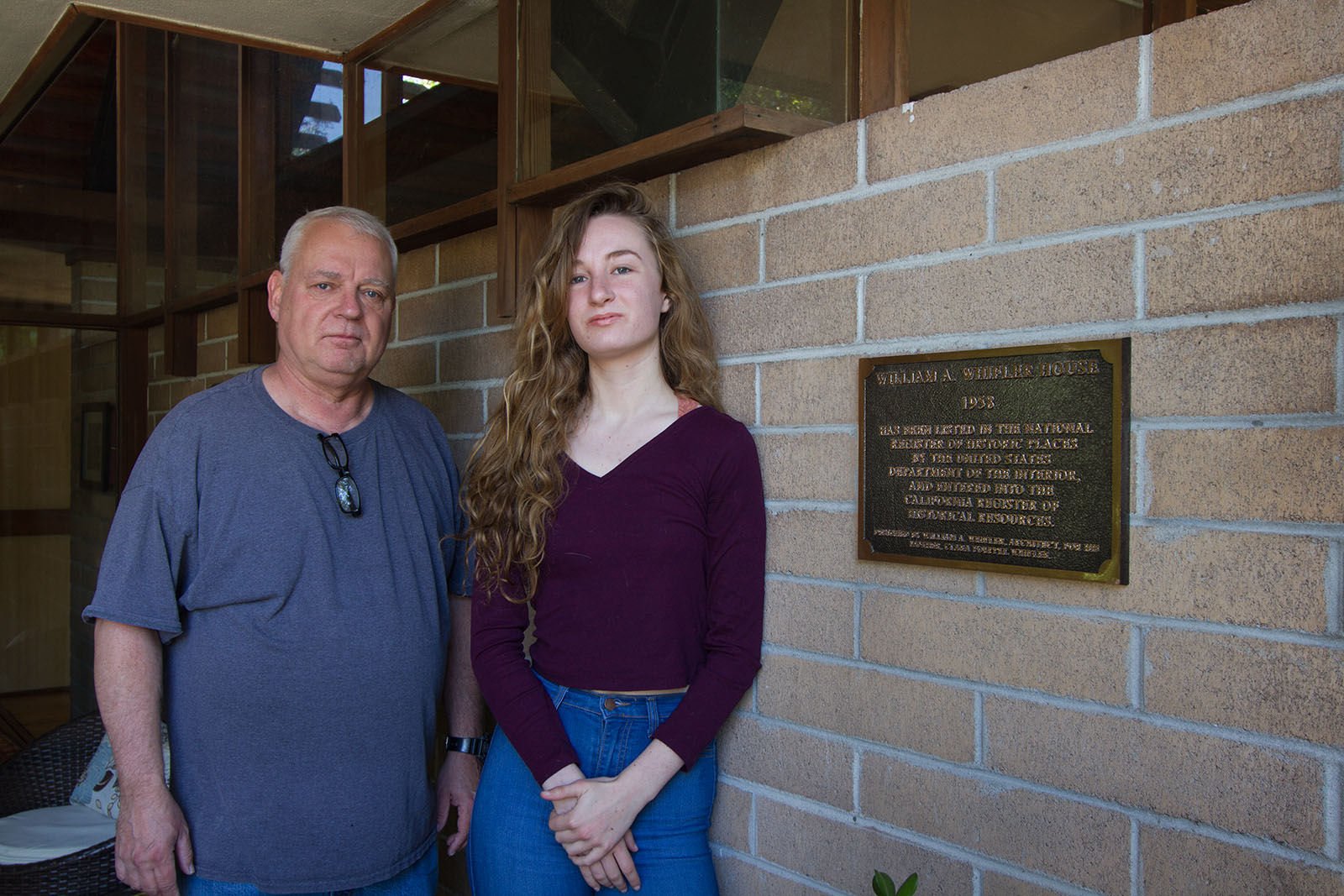 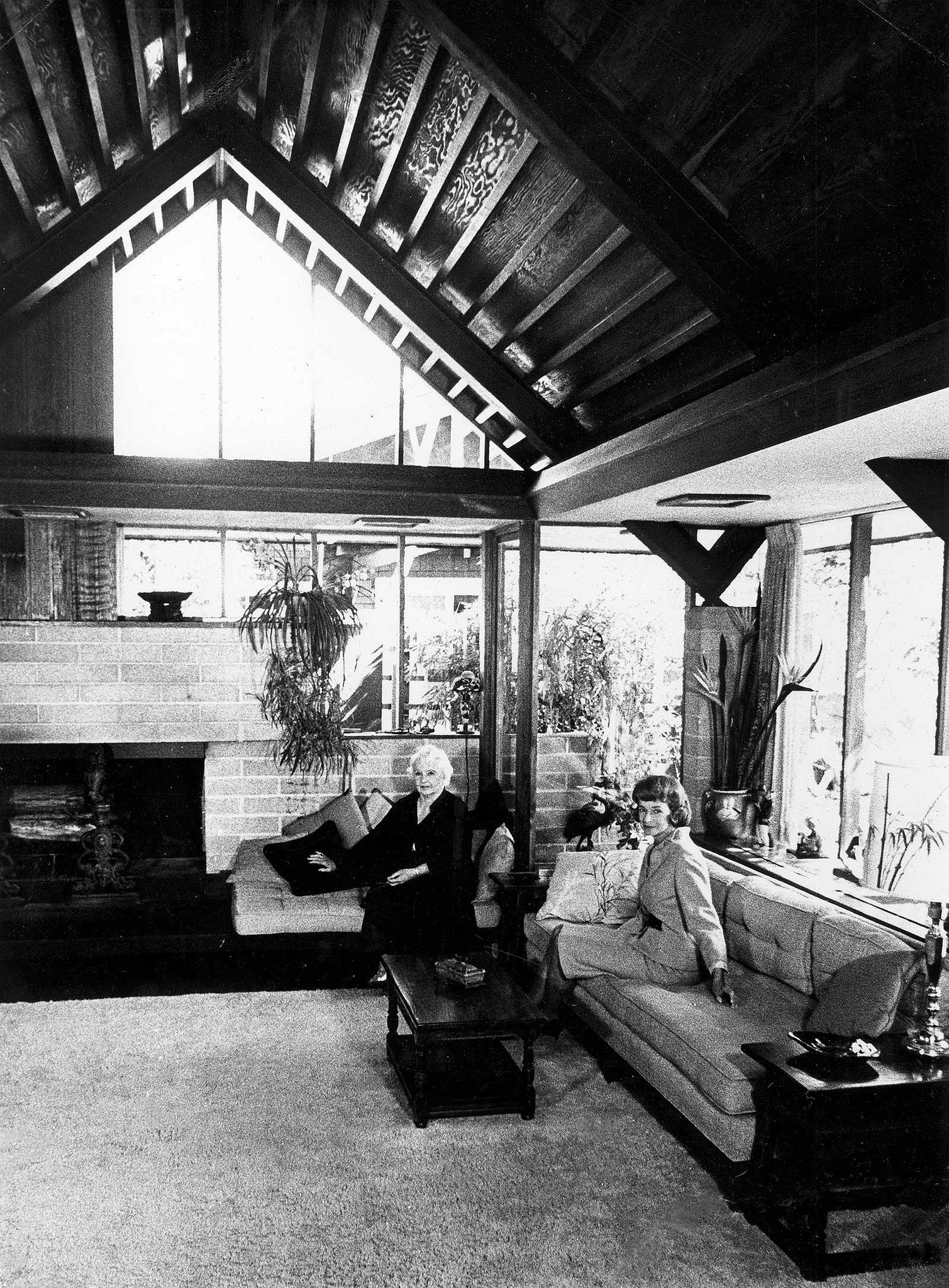