Sometimes you discover a piece of architecture which is particularly special. That’s exactly what we thought when seeing the Gores Pavilion for the first time.

After years of neglect, the building had lost its charm and needed some love and attention. That’s why the New Canaan Historical Society called architect William D. Earls AIA, to bring this unique pool house back to life. Today, we chat with the architect’s team to find out more about the meticulous work carried out to restore this little gem to its original beauty.

Can you tell us a bit about the story of this house and its owners?

The building is a pool house designed in 1959 by Landis Gores, who was one of the Harvard Five, a group of architects (John M. Johansen, Marcel Breuer, Landis Gores, Philip Johnson and Eliot Noyes) that settled in New Canaan, Connecticut in the 1940s

The original clients were Jack Irwin and Jane Watson. Mr. Irwin was an ambassador to France and his wife was the daughter of the founder of IBM. The estate, including the main house, garage, pool house, and generous grounds was sold to the town of New Canaan to become Irwin Park. What did your clients say in their brief?

When the town purchased the estate it had planned to demolish the building. The building was in pretty bad shape. It had not been used in many years and had suffered from neglect. It was covered in vines and there was even a small tree growing out of the chimney which was bursting apart the brick. The town had filled in the pool and pulled out the oil tank. So it was a pool house with no pool and no source of heat.

The New Canaan Historical Society rescued the building through private donations and a matching reimbursal grant from the state of Connecticut Department of Culture and Tourism.

What was the first question you asked to yourself after the briefing?

The building needed a purpose. I came up with the program to re-purpose the two wings that had formerly been bathrooms, changing rooms and storage into gallery spaces.

I felt one wing could be dedicated to the history of modern architecture in New Canaan. The Historical Society had a great deal of this history stored in the archives in their main buildings in town and it was not often seen by the public.

The other wing could be a gallery for what was happening now in modern architecture and design. This would keep the experience fresh and interesting for visitors, to not just focus on history, but be a place to showcase what is new also.

Between the two low wings was the great high-ceilinged room, which I felt should be brought back to its original condition in order to be a living museum for modern architecture. What’s, in your opinion, the most important feature of this building?

The building incorporated many unusual and experimental design elements when it was originally built, many of which we discovered over time. The walls of the galleries are very slim and carry no structural weight. All of the weight of the hipped slate roofs is carried by site-made trusses than span to the freestanding columns outside.

Transom windows wrap around the main room, giving the roof the appearance of floating. The floor-to-ceiling glass sliding doors on the sides of the main room slide into wall pockets and also run in front of the transom windows.

Sliding screen doors come out of these same pockets. The building has custom made copper gutters, but no exposed downspouts. The downspouts are hidden in the building. The list goes on.

What materials have you chose for the renovation?

We tried to restore the main room back to when it was first built. The floor looks like terrazzo, but was actually a vinyl product by Armstrong. I found that Armstrong still makes vinyl flooring that looks like terrazzo, so we used that. There was even slim metal-looking strips to create the look of terrazzo squares, and we replaced that exactly also.

The chimney on the outside was in bad shape, as per the aforementioned tree, and had to be rebuilt from the roof up. Finding a slim rose-colored brick to match the original took some research.

The building had no source of heat, but it had electricity, so we went with geothermal heating and cooling. Wells had to be drilled on site and the floor of the kitchen area had to be broken up to run piping to the mechanical closet behind the fireplace.

READ MORE: This Mid-Century House in New Canaan is a Work of Art 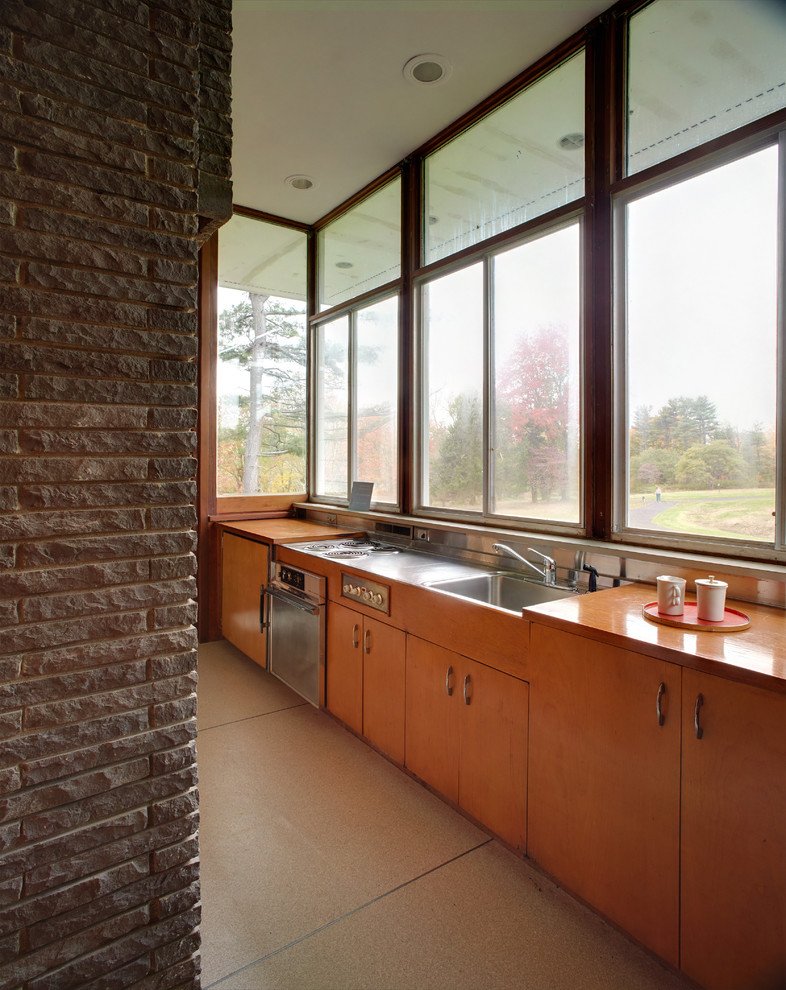 How important was the contribution of your clients, during the design process?

The Historical Society was the client. I had the interior redwood walls of the main room sanded by hand to avoid and rotary sander marks, and deciding on what stain to use to refinish them was a group decision.

Although we had a micro-budget, the Historical Society was a great client and let me experiment with certain details, especially in the galleries.

We exposed the roof trusses there and ran LED trapeze cable lighting through them. The exposed trusses help to show some of the secrets of how the building is built. I created a soffit light detail over the gallery transom windows to light up the ceiling above and the art on the wall below. I used pivot hinges for the closet doors, but these did not work too well on the concrete floors.

Experimentation requires some risks. We are replacing those hinges with regular barrel type hinges.

Last but not least, what advice would you give to someone who wants to build a house today?

The more you can plan in advance the better!